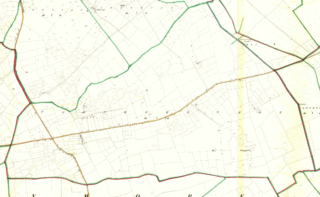 Carnmore West is the largest townland in the parish, stretching from the airport to Greaney Glass and lies between Glenascaul and Lydican. In this townland is the airport, school, community centre, and GAA pitch. The land is of good quality. There is a souterrain in the area and a number of ringforts.

There is also a lisheen within the townland, in Eddie Hanley’s field, and was used as a burial ground for adults as well as children until about 1950. The lisheen is sited within a ringfort. There was also a Mass rock in this field but it was moved many years ago. While Mass was being said in secret during Penal times, there used to be a man on guard to look out for the authorities. This field is one of the highest points in the parish from which there is a marvellous view. According to the old people if you had good eyesight you could see seven counties from that point—presumably on a clear day.

The remains of Cloch Maol castle can still be seen. There are burials around this castle where according to local tradition Seán agus trifichead Seán are buried. There is also a monument of stones similar in form to a fort nearby.

Description: Carnmore West is the largest townland in the parish.

Situated: It is at the extreme south side of the parish adjoining the civil parishes of Athenry and Oranmore along the Monivea road.

The census for 1911 was taken on Sunday, April 2, 1911, for all 32 counties in Ireland. On that night recorded in Carnmore West were 57 private dwellings. There were 61 families consisting of 326 inhabitants, 181 were male and 145 were female. All were of the Roman Catholic Faith.

323 residents were born in County Galway, 3 residents from County Mayo.

House and Building Return (Form B1)

The families in Carnmore West in 1911 were:

The census for 1901 was taken on Sunday, March 31, 1901, for all 32 counties in Ireland. On that night recorded in Carnmore West were 65 private dwellings with 5 uninhabited dwellings. There were 61 families consisting of 354 inhabitants, 178 were male and 176 were female. All were of the Roman Catholic Faith.

House and Building Return (Form B1)

The families recorded in Carnmore West in 1901 were:

The tenants recorded in Carnmore West in 1852 were:

(1650’s) No townland description information available for Carnmore West, Claregalway Parish in the Barony of Dunkellin.

The Old Age Pensions Act 1908 introduced a non-contributory pension for eligible people aged 70 and over. It was implemented from January 1909 in England, Wales, Scotland and Ireland. Proof of age was an essential part of the process of application for a pension. Because civil registration of births did not begin in Ireland until 1864, applicants had no official documentation to prove their age. It was decided that searches of the 1841 and 1851 census returns, still in the Public Record Office at this time, could produce acceptable documentary evidence of a claimant’s age.