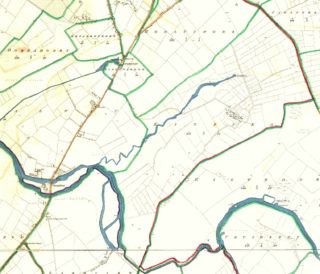 Lord Clanmorris retained 18 acres for his own use for hunting. It was described as a ‘fox cover’ in the Griffith’s Valuation of 1855; that area may have been the wood that was on Pat Duggan’s land until about 1953 when it was cut down. The herdsman at that time was Patrick Nalty. There is a lisheen not far from Bun an Uisce and the last children were buried at the turn of the century and there is a souterrain or cave near the village.

Description: The quality of the land is mainly good with some low-lying land beside Kiniska River, which rises, as the name would suggest, at Bun an Uisce and joins the Clare River about one mile away. .