The townland of Claregalway covers an area of approximately 585 acres, north and west of the modern village of Claregalway. At the time of the Ordnance Survey in the 1830s, Claregalway was recorded in the Ordnance Survey Name Books as being ‘the property of Lord Clanmorris. 2/3ds. bog, the remainder under tillage and subject to winter floods. It contains a large village of houses near its centre. Contains the ruins of an Abbey.’

At the time of this survey Claregalway is recorded locally as Baile Chláir. The meaning of Baile is easily understood as townland/town/homestead. However, the precise meaning of Cláir in the context of Claregalway has been debated. One clear and common interpretation is that Cláir refers to a plain, and to the flat and relatively featureless landscape through which the River Clare flows, lending its name to the village and townaland of Claregalway as it flows through it. Another interpretation is ‘Town of the Plank,’ which may refer to a plank used for crossing the River Clare. 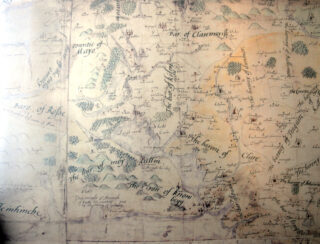 Our work in the townland during 2020 identified 44 minor placenames and places of interest known locally within the townland. These are marked on the map below, and included in tabulated format. These placenames were collected by Seamus O’Connell from Tom Hughes and Paddy O’Connell. The placenames collected refer to fields, wells, rocks, houses, trees, ringforts, and other elements of the local landscape.