The townlands of Knockdoemore, Lecarrowmore, Loughgeorge, Peak, and Rooaunmore are located north and northeast of the village of Claregalway. Collectively, the townlands cover an area of approximately 817 acres. This part of the parish of Clareglaway is notable as the area where three major routeways come together; the Galway-Tuam Road, the Galway-Roscommon Road, and prior to the construction of the Curragh Line in the 1860s, the route from Galway to Headford was via Loughgeorge and Aucloggeen. A series of milestones (in Irish miles) mark this old Galway-Headford route. The majority of these milestones still stand, with the six-mile marker stone still located in the townland of Loughgeorge. The importance of Loughgeorge as a junction of three major thoroughfares in the 19th century is reflected in the location of an RIC barracks at this spot during this time. The former RIC barracks remains in use today as a Garda Siochana station. 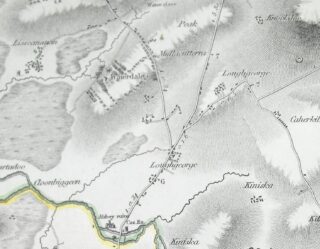 At the time of the  Ordnance Survey Name Books in the 1830s, the townlands are recorded as:

Our work in the townlands during 2020 identified 25 minor placenames and places of interest known locally. These are marked on the map below, and included in tabulated format. These placenames were collected from Seamus O’Connell and Peter Greally.