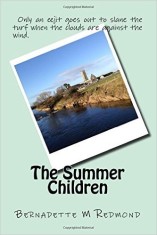 This book is a memoir of long summer holidays the author spent in Claregalway with her mother’s family from 1944 to the mid 1950’s. Living in an inner city area in Dublin this annual holiday was like another world where she, and her two siblings, ran free and wild ignoring edicts to keep away from the river, stay out of  field with the bull in it,  not to eat or drink anything from Bina Lenihan’s kitchen and not to annoy the neighbours. Lying about these activities was enough to ensure that she, and her co-conspirators, had sufficient sins to make a weekly confession worthwhile.

As self-centered children they were not aware of the struggles and sacrifices of their hardworking family who farmed the land and slaned the turf in the townlands of Gortcloonmore, Gortadooey, Montiagh, Cregboy and Cloonbiggen, the latter in the townland of Claregalway, all, within the Parish of Claregalway.

Today the old Claregalway townlands are little more than names on a map vying for space with new housing estates, and a simple way of life has long gone. Local characters are remembered by fewer and fewer people but for those who do remember them they are recalled with great affection.

In an era when people stopped for the angelus bell and when money only changed hands on Fair and Quarter Days neighbour harvested with neighbour, divided butchered meat  and Hughes Shop put weekly necessities ‘on the ledger’ until customers had the where-with-all to settle the account. Living as we do now in money and possession driven times a look back on a simpler life is a salutary experience.   As her Dublin Gran was wont to say ‘You don’t know where you’re going unless you know where you’ve been’ so as this memoir unravels the tricks of memory and fable, it records both sad and happy times. There is mischief aplenty, music galore, waking the dead, tales of Canon Moran and family skeletons.

Daughter of a Sea Locked Isle 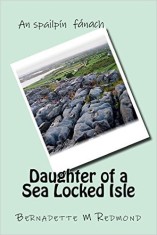 This is the story of Catherine Qualter born in 1859 in the townland of Gortcloonmore, two miles down a bog road in Claregalway that was so out of the way that it was said to be ‘behind God’s back’. The Qualter family home was one of eleven limewashed cottages clustered together in the little Gortcloonmore colony on the Lambert Estate which were registered in 1851 in the Griffith Valuation Household Survey which was carried out to determine liability to pay the Poor rate (for the support of the poor and destitute within each Poor Law Union).

Following the Famine years want and poverty continued to be a problem and agricultural families existed as tenants-at-will, subject to the whims of James Staunton Lambert their Ascendency landlord, the will of God and the vagaries of the River Clare. In 1879, the year of ‘An Gorta Beag’, Catherine left home never to be seen again.