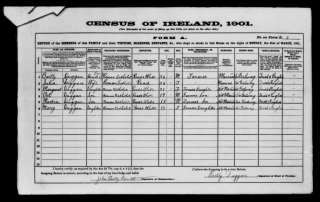 Census of Ireland, 1901 - Form A
National Archives of Ireland (NAI) CC BY 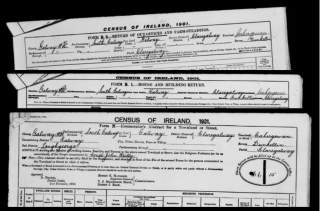 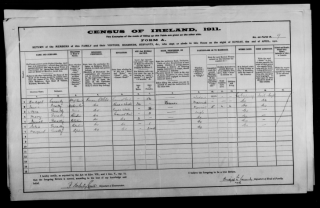 Census of Ireland, 1911 - Form A
National Archives of Ireland (NAI) CC BY 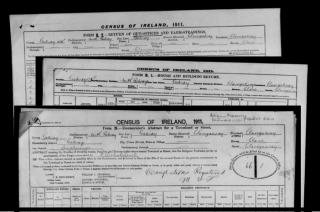 The 1901 and 1911 censuses are the only surviving full censuses of Ireland open to the public. Both censuses cover the island of Ireland. They were released to public inspection in 1961, because of the stream of requests for information about people’s ages, particularly those born before civil registration of births began in 1864.

The 1911 census asked a significant additional question: married women were required to state the number of years they had been married, the number of their children born alive and the number still living.

House and Building Return: this form gives you details of the houses and buildings in a townland/street, including what kind of building (private dwelling, factory, shop etc.), what class of building, how many families lived in each house, how many people lived in how many rooms, and name of head of household. This form is very useful for the examination of urban overcrowding.

Return of Out-Offices and Farm-Steadings: this form tells you what extra buildings are attached to a dwelling, for example, stables, coach houses, cow houses, dairies, piggeries, barns etc. This form gives an idea of the full extent of a person’s property.

The Enumerator’s abstract: this form gives details of the number of houses in a street or townland, and the number of occupants of each house, broken down by sex. The form also tells you the religious denominations present in each household.

The 1901 and 1911 censuses are the only complete surviving census records for the pre-Independence period. In June 1922, the Four Court Building in Dublin, containing census records went up on fire and many documents were set alight. Fragments of census survive for 1821 through 1851 for some counties were saved, they are as follows:

The census for 1861 and 1871 were destroyed by the government for data protection.  General Statics for each county were record.

The census for 1881 and 1891 were pulpped due to lack of paper in the country during the years of World World I.