You are here: Home>People>Thomas Kerrigan

The Claregalway Historical and Cultural Society 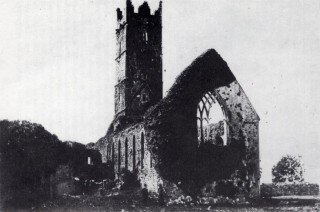 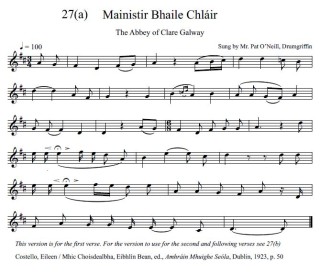 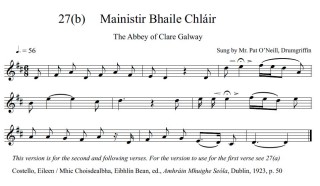 Thomas was a local poet who was born in Caherlea, Claregalway. A good many of his poems were known to the generation that has now almost passed away and fragments of them may still be found. He had not the music of Raftery or his easy ﬂuency but his poems are valuable for the insight they gave of the local conditions in his time. His best known poem is ‘Mainistir Bhaile Chláir’ — Claregalway Friary.

An Preabaire (a strong lively man) was a stone mason by trade and was said to have worked as such at the building of the previous parish church. He was said to have been a tall man, much taller than the average and a good hurler and athlete. A long distance jump, which he made, is said not to have been equalled or exceeded since. The spot at which it was made, in the fields called an Turloch Iseal to the east of the road from Carnmore crossroads to the Oranmore railway station, is still pointed out.

An Preabaire died in the village of Caherlea. He carved stone bedposts for himself which still survive. He was also engaged in carving a stone to be placed on his grave, but died before completing it. It is still pointed out in Caherlea.

The story of how he came to be called Preabaire, which means a lively active person, is interesting. There was a family of the ubiquitous Blakes in Summerfield near Cahergowan village who were of the gentry class. On this occasion there was some celebration there and the Preabaire was amongst those present. He asked one of the Blake ladies to dance with him and she did so. It was a daring thing for a man in his station to do but the lady was highly pleased with his audacity and no doubt skill as a dancer and in thanking him she said ‘Baistim se Preabaire ﬁr ort’ and the name remained with him while he lived.

He is also remembered for his humour and jokes as when one day himself and John Fox from Caherlea were in Galway and some of the British soldiers were playing soccer in Eyre Square. They had never seen soccer before and when the ball came out over the wall they got it and thus brought the ﬁrst soccer ball to Claregalway. It is said that the football was being kicked around in Fox’s turlough until the great famine.

Thomas Kerrigan died between 1920 and 1930. After his death ten ballads were attributed to him, best known of which is “The Abbey of Claregalway” which was published in 1919 by Mrs Eileen Costello, Tuam.

It is not hard to say that death is a cold and tormenting thing,
And (…),
And it is not worth (…) when she is laid out
But may The Son of God help our souls if we are creatures who will be sent adrift (?).

I solemnly declare that if I were a priest in the place
That no sacramental penance would be given to any man in Ballyclare
For they reject sin and follow the best rules,
And so long as (…) on the chair they will be soon found in heaven (?).