Selection of books, mentioning Claregalway within their covers

described in a series of letters to an English gentleman

Book digitized by Google from the library of the New York Public Library and uploaded to the Internet Archive.

SEPT 28 Proceeded to Tuam, by Clare Galway barony Of Clare. Old and elegant remains of an Abbacy of Dominican Friars with extensive burying ground; monuments and inscriptions quite exposed to the weather – effigies and fragments of McMurroughs and O Donoghooes, grim kings of Leinster and Munster; and saints and warriors, in stone, strewed upon the floors and grunsel edge. Skulls and bones also lying in careless profusion, as well as piled in some corners and recesses

Wonderful delicacy of the verb, as here used; and not at all reached by Pope’s imitation, if it be one; but there are expressions which will not bear transfusion-the spirit escapes in the attempt. Juvenal and Virgil, the great masters of poetical and apposite words, before Milton-but does any uninspired writer approach to his mastery of diction in grandeur, compass, or power? Remarkable that Bacon’s language is also highly figurative, and rich I in poetical imagery without impairing the force or closeness of his reasoning.

My nephew Mr. H., conveyed to the carriage a skull of very remarkable developments, a bon bouche, I suppose, or study for the phrenologists of Edinburgh; but, quaere, why not for the nosologists?

The ruins of Clare are very picturesque, from the softness and calm of the site, near the stream which winds past to Loch Corrib; and from the fine portions which remain of the building; the tower and steeple-arch light and beautiful windows and pillars of good proportion and pitch An adjacent house is at present occupied by a solitary Franciscan, in the poorest circumstances: a young man, but apparently infirm, with famine in his cheek. Subsists in summer partly by questing, in other words, begging food from house to house; but unable in winter to make these rounds. Says mass daily in the chapel of the Friary, for which he receives from the people pittances of potatoes and turf; was very grateful for a trifling donation of money; and showed his library-which consists of an imperfect copy of the Liber Dominicalis, or Chronicle of the Religious Houses of the Dominicans (where this house is noticed as the Caenobium Clarae Galwidiae); an Irish Vocabulary, dated 1814 printed at Dublin; an imperfect copy of the Latin Vulgate, unbound; and one or two volumes of Roman Catholic books of devotion. If he is a Franciscan, the ancient and bitter feuds of that order and the Dominicans are all forgotten by this poor cordelier, who reigns the sole and undisturbed hierarch of the once splendid domus dominicalis of Clare Galway. 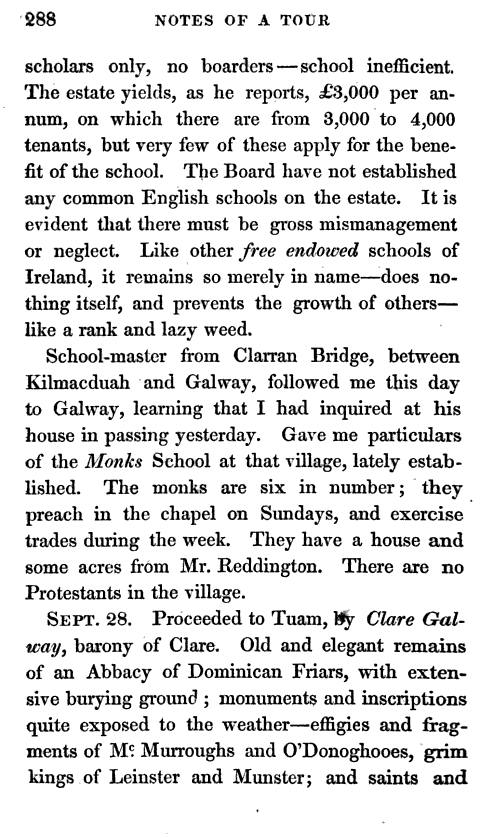 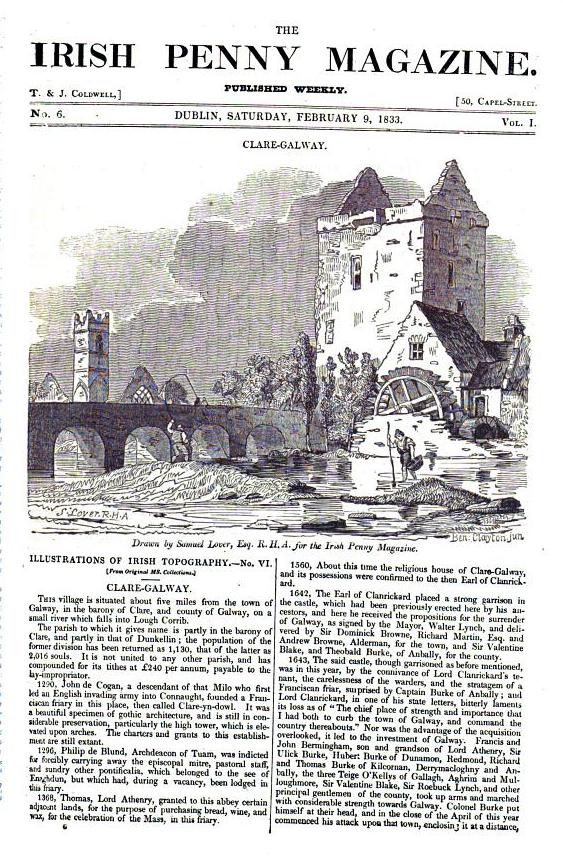 1837, A Topographical Dictionary of Ireland

Comprising the Several Counties, Cities, Boroughs, Corporate, Market, and Post Towns, Parishes, and Villages, with Historical and Statistical Descriptions, Embellished with Engravings of the Arms of the Cities, Bishopricks, Corporate Towns, and Boroughs; and of the Seals of the Several Municipal Corporations. With an Appendix, Describing the Electoral Boundaries of the Several Boroughs, as Defined by the Act of the 2d & 3d of William IV. 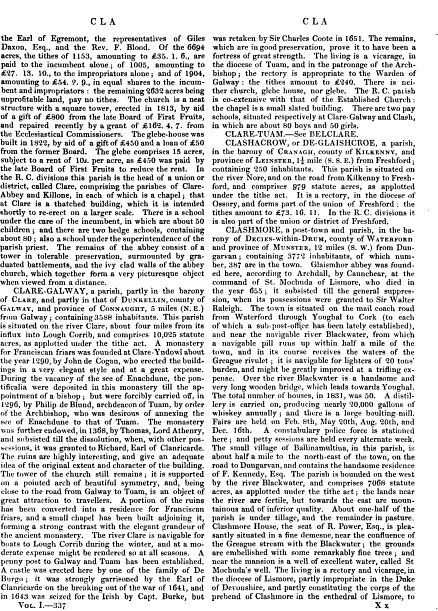 1846, The Parliamentary Gazetteer of Ireland

Adapted to the New Poor-law, Franchise, Municipal & Ecclesiastical Arrangements, and Compiled with a Special Reference to the Lines of Railroad & Canal Communication, as Existing in 1814-45, Volume 1, A. Fullarton & Co.

The surface is gently but pleasantly diversified; possesses considerable beauty in the centre, from the passage across it of the Clare river: and comprises, in the north and toward Lough Corrib, a large proportion of bog; yet consists, in the aggregate of good land. The seats are Rockwood, Rocklawn, Lydacan and Waterdale. The road from Galway to Tuam traverses the interior; and, after having crossed the river by an old but substantial stone-bridge, sends off a branch toward Headfort and Ballinrobe. The village of Clare-Gal way straggles a considerable distance along the Galway and Tuam road chiefly northward of the river, and has a thoroughly rural, an airy, and but a paltry appearance. An old ruinous castle, built after the close of the 13tb century by one of the family of de Burgos, adjoins the bridge, overhangs both the river and the road and has a slightly picturesque appearance. In the wars of 1641 this castle was garrisoned by the Earl of Clanricarde; In 1643, through the contrivance of a tenant of the Earl, the management of a Franciscan friar, and the carelessness of the warders, it was surprised by Capt. Thomas Bourke of Anbally, and, in 1651, it was taken possession of by Sir Charles Coote. A Franciscan friary, built about the year 1290, by John de Cogan stands on the margin of the river, about 100 yards above the bridge. Though a ruin, and much dilapidated and peeled by the gradual ravages of the peasantry, it has several parts in tolerably good preservation, and has of late years been carefully protected from further dilapidation. It is a beautiful specimen of Gothic architecture; its high tower, in particular, exhibits some exquisite features, and is raised on arches; but the edifice is much impaired in its effect by sheds and modern paltry additions which have been thrown up against its walls. A small community of friars still contrive to inhabit it; and, when seen darkly moving among the ruins by a stranger from the road, they look like the emblems of worldly opulence mourning the departure and desolation of its grandeur. The interior of part of the abbey contains some large accumulations of bare, bleached human skulls.

This parish is a rectory, and part of the benefice, wardenship, and peculiar jurisdiction of GALWAY: which see. Tithe composition, £180. But though the parish is called a rectory, one-fourth of its tithes, compounded for £60 is in the donation of the archbishop of Tuam, and is applied in aid of the discharge of strictly parochial duty. Three Roman Catholic chapels, one of which is parochial, one a private bouse at Waterdale, and one the chapel of the monastery, have an attendance of respectively from 600 to 800, from 300 to 400, and from 80 to 90. In 1834 the Protestants amounted to 10, and the Roman Catholics to 3,828, and 2 daily schools – one of which was in the chapel and the other at Clash-had on their books 82 boys and 50 girls. 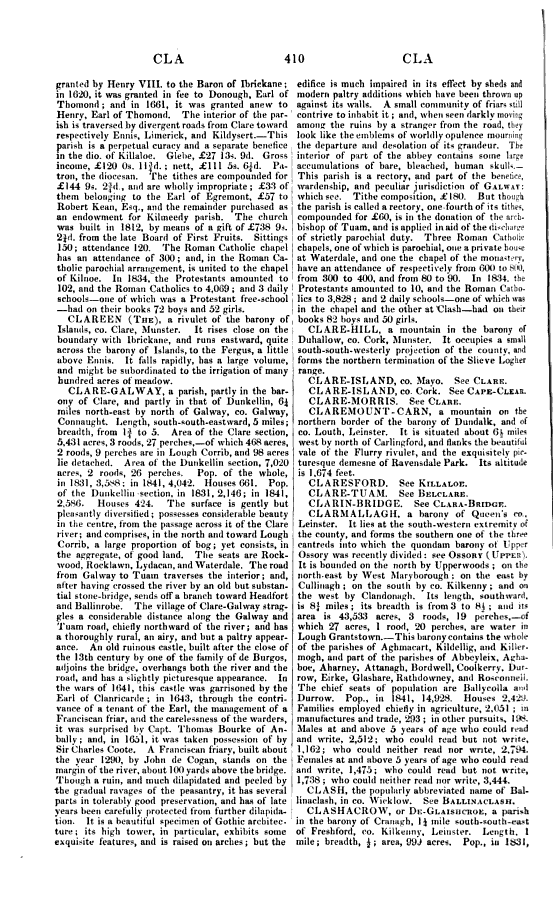 1864, Murray’s Hand-Book for Travellers in Ireland

-Adjoining Killeen is Rockwood. From hence passing some primitive mud coloured Irish villages worth notice from the extraordinary manner in which they are built and huddled together without any apparent plan we arrive at 7 miles, Clare-Galway a small village on the Clare Galway river possessing a picturesque castle and a very beautiful abbey erected in the 13th century for Franciscan friars by John De Cogan It is a cruciform church consisting of nave choir and transepts surmounted by a graceful tower of 3 stages lighted by a small square window in each stage though there is a Dec window looking towards the E The intersecting arches underneath the tower are very beautiful as is the mutilated E window of the choir which is also lighted by 6 plain lancets on each side It contains a Dec altar tomb of the date 1648 The nave has only S outh wall standing lighted by plain pointed windows and having underneath 2 blocked arches which probably served for altar tombs Of the North wall there only remain 4 noble arches springing from rounded piers. A portion of the abbey is devoted to the use of a trumpery looking little chapel. The castle close to the road is a massive square tower lighted by a few loopholes and is a good example of the better class of fortified mansions It was erected by the family of De Burgo and was garrisoned by the Marquis of Clanricarde in the war of 1641. 8 miles, at Laghtgeorge a road diverges on route to Tuam. 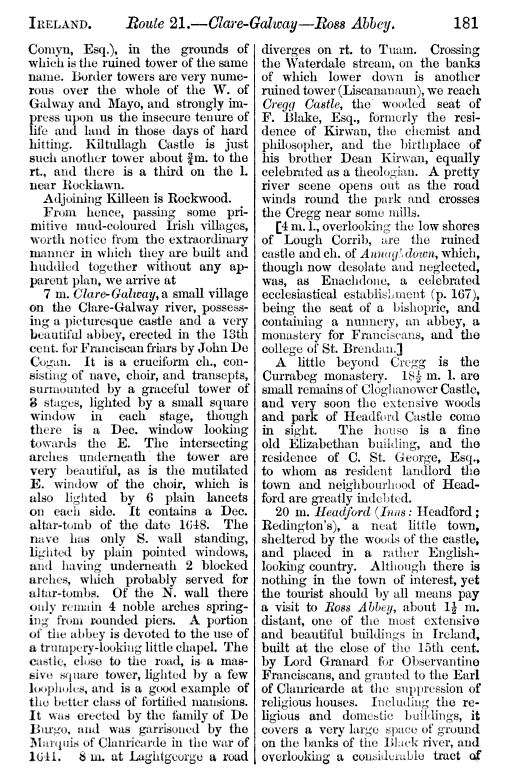 1872, Lough Corrib: Its Shores and Islands ; with Notices of Lough 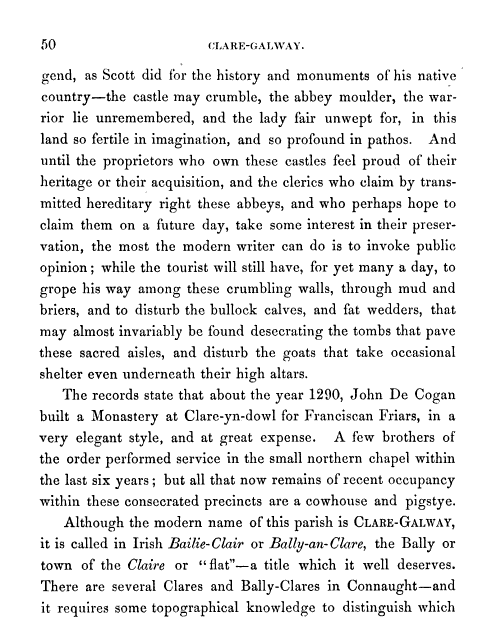